A tale of two architectures: local adaptation under migration-selection balance 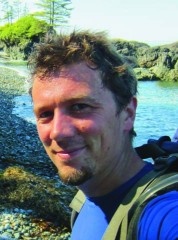 Sam Yeaman is an Assistant Professor and AIHS research chair in bioinformatics and computational biology at the University of Calgary. His talk will discuss how local adaptation evolves at the genome scale, first exploring theoretical predictions about the tension between migration and divergent selection and then presenting some empirical results that test these predictions in fish and conifers. Theoretical studies with individual-based simulations show that two very different kinds of locally-adapted genetic architecture can evolve, where the allelic contributions are either stable and highly clustered or diffuse and transient. Two critical factors drive the evolution of these architectures: redundancy in the mapping of genotype to phenotype and the potential for rearrangements to reshape the genome. To test if these factors operate in nature, we then look at whether rearrangements have contributed to apparent clustering of adaptive loci in three-spine stickleback, and explore the extent of convergent local adaptation in conifers, which should not occur under high genotype-phenotype redundancy.

Yeaman S. 2013. Genomic rearrangements and the evolution of clusters of locally adapted loci. Proceedings of the National Academy of Sciences. 110:E1743-E1751.